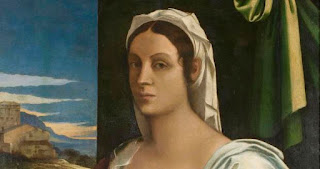 Vittoria Colonna was a woman of great personality, a poet and, according to some authors, "the most famous woman in Italy." On the one hand, daughter of Fabrizio Colonna and Agnese da Montefeltro, and granddaughter of Federico da Montefeltro, Duke of Urbino. On the other, Marchioness of Pescara, title of her husband, Francisco Fernando de Ávalos, Neapolitan, of a family faithful to the Crown of Aragon and Naples, son of Alfonso de Àvalos and María Hipólita Diana de Aragón y Cardona, with whom the wife at the age of 16.

The Colonna, allies of the De Ávalos family, arranged the marriage when they were still children. They were married on September 27, 1509 on the island of Ischia, in the Bay of Naples, in the "Aragonese castle" that, owned by the kings of the Crown of Aragon, passed into the hands of Fernando el Catolico, who, gratefully to Íñigo de Àvalos for the great defense against the French, he granted the government of the island to this family.

Despite being an "arranged" marriage, it seems that their love ties were remarkable. He had to go to war under Fabrizio Colonna to fight for the emperor against France and left Ischia. Taken prisoner at the Battle of Ravenna in 1512, he was deported to France. Later he became an officer in the army of Carlos V and was seriously wounded in the battle of Pavia on February 24, 1525, where Francisco I. Vittoria's French army was defeated and ran to meet him in Milan, but before arriving he learned of his death in Viterbo. Very depressed, she retired to a convent in Rome, an important event for her since she made friends with several ecclesiastics who promoted a reformist current within the Catholic Church, such as the Spanish Erasmian Juan de Valdés. This was decisive for Colonna -a great disciple of hers-, although she returned to Ischia and was spared from experiencing the sack of Rome on May 6, 1527.

However, imbued with the new religious spirit, in 1531 she returned. In 1537 he went to Ferrara and in 1539 he returned to Rome where he coincided with the one who was to become a great friend, Miguel Ángel Buonarrotti, with whom he shared the commitment to religious reform. Colonna was persecuted by the Inquisition - that is why she always lived among convents - especially for being a great defender of the "norms" of San Francisco, in front of Catholic orthodoxy.

His most outstanding literary work are the Rhymes -some of profane and loving ones dedicated to the deceased husband and others of sacres-, which reveal the influence of Petrarca. The first edition, from 1538, was printed in Parma, but 19 editions were made in the 16th century.

Several portraits of Vittoria Colonna are preserved. The portrait in oil on wood in the Museu Nacional d’Art de Catalunya, until now dated by the museum around 1520-1525, is the work of the Venetian painter Sebastiano del Piombo or Sebastiano Luciani, among other things, a friend of Michelangelo. There is also a second portrait of him, very similar, but in this case the figure carries a cup in his right hand and does not include any landscape. It belongs to the Harewood Collection in Leeds (England), one of the great European collections of Venetian painting.

The portrait of the National Museum comes from the Legado Cambó (1949), considered the most important disinterested contribution the institution has ever received. He joined it in 1954 - the legacy came between 1949 and 1954.

The Vittoria Colonna from the Cambó Collection

The protagonist stares at us. He dresses very austerely: he does not adorn himself with any jewelery, or earrings, or necklaces, or rings ... He does not need it. She is a woman who goes beyond appearances of rank and the image confirms a solid personality. Even the dress, of a carved fabric, typical of the fashion of those years, is simple. She wears a white veil on her head and a white scarf on her shoulders. This seems to tell us that she was a widow, with a «Franciscan» simplicity present in her ideas and her image. The wide neckline, in the Renaissance way, or in the "Roman" way. She places the index finger of her right hand on the neckline, a detail that seems to allude to her depth of spirit. Meanwhile, with the index finger of his left hand he points to an open book of poems, who knows if not the Rhymes dedicated to the husband. On the table, an oriental tapestry like those that were common in Europe at the time and visible in many other paintings such as those of Johannes Vermeer.

If all that has been said so far is true, we have to think that this portrait of Colonna should be after 1525, since her husband died this year.

But we keep watching. The portrait is against a landscape. Landscape is a common resource in the painting of that time and in Piombo's work. We wonder if it is a resource landscape, simply decorative, or a landscape that tells us about the protagonist.

Reviewing numerous graphic documentation on the landmarks of Colonna, it seems plausible that the construction that appears is the tower of Castello Aragonese, and even, looked closely, you can see the mast of a ship in the wake of the coast. Thus, it could well be the "Aragonese castle" of Ischia, where the young couple married, and still known today by this name, captured by the painter in memory of her esteemed husband, dressed as a widow.

If so, the portrait could therefore perhaps have been painted in Rome shortly after the husband's death or perhaps even more likely when he returned to Ischia in 1527. This may be, it is a fairly likely hypothesis. 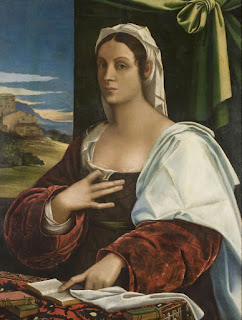 From the fifteenth century on, humanism promoted a new mentality that places the individual (man) as the center and measure of all things (it sediments of androcentrism). This fact will promote in the artistic field the emergence of new genres associated with the interests and desires of a new clientele. In this sense, the promoted portrait appears as an image of power. At this time the female portrait became something valuable, as a symbol of private property. Likewise, we also find portraits of women who deconstruct the socially assigned role. This is the case of Vittoria Colonna (aristocrat, cultured, refined, wrote loving poetry and reflective prose on religious and spiritual themes =. Admired by great men of her time such as Baldassare de Castiglione (author of the book The Courtier), Leonardo Da Vinci, who immortalized her in a portrait, or Michelangelo, who was strongly influenced by her, a relationship that has left an extensive epistolary relationship.
Leer más